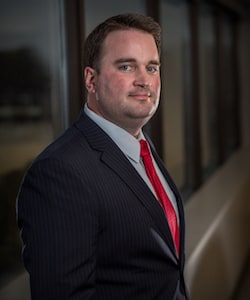 Timothy A. Nolte Jr. is an attorney in the firm’s Blue Bell, Pennsylvania office. Mr. Nolte joined Keches Law Group, P.C. as a personal injury attorney in 2017 at the firm’s headquarters in Massachusetts. Mr. Nolte was born in Philadelphia, Pennsylvania, where he spent the majority of his life before enlisting in the United States Marine Corps in 2004. While serving as a Marine, Mr. Nolte deployed twice in support of Operation Iraqi Freedom, where he served as an infantry squad leader with Fox Company, 2nd Battalion 6th Marine Regiment, based out of Camp Lejeune, North Carolina.

Mr. Nolte returned home to Pennsylvania in 2008 to pursue an undergraduate degree at Penn State. While obtaining his degree in the evenings, he started a business as a public insurance adjuster. His company helped residential and commercial property owners obtain maximum recovery for their insurance claims. As a public adjuster, Mr. Nolte saw how insurance companies would sometimes treat his clients unfairly, and it was from this that he realized he could do more to help people as an attorney.

Mr. Nolte attended Suffolk University Law School where he earned his J.D. with a concentration in Trial and Appellate Advocacy. Mr. Nolte was the president of the Suffolk Law Veterans Association and a member of the nationally recognized Suffolk Trial Team. As a member of the National Trial Team, Mr. Nolte competed in numerous competitions against the best student advocates in the nation. Upon graduation, Mr. Nolte was asked to return to the team as a coach. He continued in that role until relocating back to his home state of Pennsylvania.

Upon returning home to Pennsylvania, Mr. Nolte opened an office for the firm in Blue Bell, not far from where he lives in Bucks County. Mr. Nolte continues to grow the firm’s presence in Pennsylvania, bringing the quality, compassion, and results that the people of Massachusetts, and all of New England, have experienced from Keches Law Group’s 35+ years of serving their communities.