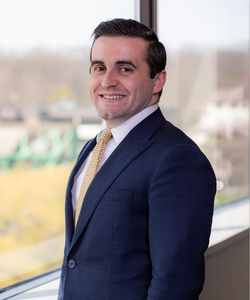 Attorney Kiely joined Keches Law Group in 2022 and focuses his practice area on the representation of seriously injured clients with a particular emphasis on clients with traumatic brain injuries. After almost 5 years of living and practicing in New York, Mr. Kiely became a member of the Massachusetts Bar in 2021 and subsequently moved to Boston to join Keches Law Group.

Born and raised in Ireland, Mr. Kiely graduated law school from Ireland’s leading and highest-ranked university, Trinity College Dublin. While at law school, Mr. Kiely was a senior editorial board member of the Trinity College Law Review. Mr. Kiely concluded his professional legal training and qualified as a Barrister-at-Law from The Honorable Society of Kings Inns, whereupon Mr. Kiely worked initially in the field of complex international private equity transactions in the European offices of a US private equity fund.

In 2017, Mr. Kiely moved from Ireland to the United States to join a notable family law firm in Manhattan and became a member of the New York Bar, practicing in New York City and on Long Island. In Mr. Kiely’s first jury trial in Manhattan, arising out of an act of domestic violence, Mr. Kiely’s client was awarded $5 million for assault and battery and intentional infliction of emotional distress at the hands of her former husband (the settlement offer before trial had only been for $30,000). Mr. Kiely was also an integral part of the legal team in a landmark case in New York State concerning spyware technology. In February 2020, Mr. Kiely was selected as one of the Irish Echo’s Top 40 under 40 honorees. The Irish Echo is the USA’s most widely read Irish American newspaper. Mr. Kiely also received a certificate of appreciation from the New York State Senate in recognition of his achievements.

In 2012, Mr. Kiely interned with a prominent congressional candidate during his successful (and first) campaign to represent the fourth congressional district of Massachusetts in the US House of Representatives. Mr. Kiely also spent one year studying German civil law, European Union law, public international law, and human rights law, at Friedrich Alexander University, near Nuremberg Germany. Mr. Kiely speaks German fluently and has an in-depth knowledge of German civil law. Mr. Kiely is an avid student of history and enjoys traveling.